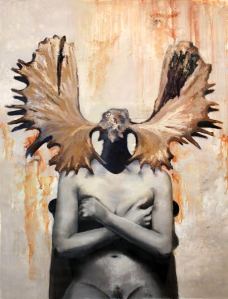 Who are you and what do you do?
I was born in Grand Rapids, Michigan where I lived until attending the University of Michigan’s School of Art and Design. As an Undergraduate, my primary areas of focus were painting, film and photography because of the mediums inherent narrative properties. After college, I moved to Detroit, where my interest in communication and symbolism became more of a focus in my paintings. My current work often overlaps surrealist-like painting with traditional portraiture, while thematically exploring ideas of gender dynamics, communication (and/or the inability to communicate), symbolism and psychopathology.

When did you first start making art?
I honestly don’t really remember. I suppose it’s always been there. I have a memory from 1st grade- Mrs. Edies’ Class- its Tuesday, which meant we had art that afternoon. I was giddy. I looked like a blowpop with these twiggy little limbs and giant head, maned with wild white-blonde hair. I bounced around all morning like a little pony, until I finally got in trouble. I always got in trouble. Either for doodling on everything or talking to much. Things really haven’t changed.
I showed a natural aptitude and inclination towards art at such a young age I am inclined to say I have always been making something or other.

When you think of the word riot what comes to mind?
Force of Will. Reactive response to oppression. I think we are naturally pre-disposed to visualizing great angry masses of people swarming the streets, violently protesting perceived wrongs, which is in fact one example of a riot. But riots don’t have to be so public and demonstrative- they are also the little things we do; the internal changes, the tiny shifts in thinking that break established patterns of beliefs that marginalize and oppress. There is no riot too small- it is every thought had, or action taken that works toward equality.

What drew inspiration for the artwork for this show?
The piece in the show is actually part of a larger body of work. I use the female form in varying positions and circumstances to see if an idea, emotion, or critique can be communicated using bodies, symbols, and titles. I am interested in different forms of communication (verbal, written, body language, etc). I generally use body-langue and text to address gender issues. Circumstances of living can have an unfortunate way of often making one feel silenced, especially for a women. This body of work is my personal way of addressing issues of communicating or the inability to communicate in relation to my gender.

What are some artists or musicians that you admire?
I could honestly give you an endless list of artists and writers that I admire. For starters the depth and vulnerability of Francis Bacon, Francesca Woodman, and Polly Morgan. The expansiveness of Terrence Malick. The playfulness and experimentation of Charline von Heyl, and Cosima von Bonin. The understated elegance of William Eggleston. The linage and venerability of Frieda Kahlo, Ana Mendieta, Judy Chicago, Carloee Schneemann, Andrea Fraser, etc. Not to mention the witty vulgarity of John Waters and Donald Barthelme. The obsessive darkness of Gerhard Richter, Hanna Linden, LaMort, John Cocteau, Huysmans, Kafka. And the other-worldliness of Arda Collins and Karen Russell. As far as musicians, I tend to be less affected by musicians or group as I am specific songs. Again, the list is endless, so I’ll spare you.