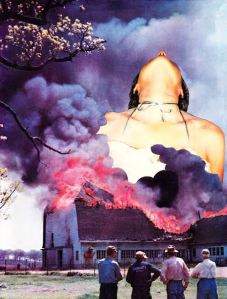 Who are you and what do you do?
My name is Erin Case, and I’m a visual artist. I mostly work in analog collage. I’m currently in college, dual majoring in art and psychology.

When did you first start making art?
I’m pretty sure I always have. I went through a lot of different outlets and mediums before I found my niche in collage, which was about five years ago.

When you think of the word riot what comes to mind?
Revolting against something that is fucked up, or something successfully hilarious (As in, “Wasn’t that comedy show a riot?!”). What a strange language we have, where one word can define two completely opposite sentiments.

What drew inspiration for the artwork for this show?
I was approached by the editors of Radar Poetry to make an illustration to accompany a poem in their 5th issue, “Kelly the Killer Kapowsi” by Rachel Ronquillo Gray. It references a Saved by the Bell episode (“Fatal Distraction”) in which Zach Morris wants Kelly Kapowski to go to the dance with him, so he plants listening devices and spies on Kelly’s slumber party in order to find out who she’s going with. The girls figure it out and play this elaborate “Fatal Attraction”-like prank, to get even for their privacy being invaded. Kelly basically stalks Zach, and the girls manage to convince him that Kelly is a homicidal maniac that snaps whenever she’s in love with a boy. Zach, terrified, turns to Principal Belding for help, and when Mr. Belding learns Zach is so scared of sweet girl Kelly, he laughs and replies, “What’s she gonna do? Spike you to death with a volleyball?” It was a lucky coincidence that I’ve seen every episode of Saved by the Bell and knew exactly what Gray was referencing in her poem. She took this “what’s she gonna do, she’s a girl, man up!’ attitude and flipped it on it’s head, writing this super violent poem wherein Kelly Kapowski beats the living shit out of Zach Morris with a baseball bat. I wanted to mirror this point in the collage. So, that’s Volley.