Who is in the band and what do they play? 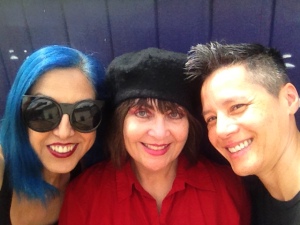 Alice: The band is Angie Skull on Bass, Fiona Ngo on lead Guitar, Alice Bag on rhythm guitar and vocals. We are not a regular band, Angie and Fiona are friends who happen to be musicians and volunteered to help me on my book tour.

When and how did you become a band?
Alice: Angie and I have been playing together off and on for several years, she did most of my Violence Girl tour dates with me. Fiona played with me a few times when I visited Champaign and we loved hanging out and making music together so we agreed that she would play with me whenever her schedule as a full time professor would allow.

How did you come up with your band name?
Alice: We didn’t actually have a band name but since you asked, we thought we should come up with one. We considered Alice and The Bag Ladies, The Suffragette Setters, and Alice Bag and The Baguettes. The last one made us smile the most.

Tell us about your first show?
Alice: We have yet to do our first show together. It will happen July 12th in Los Angeles. Fiona lives in Illinois and Angie and I are in California, so we have been practicing long distance and will get together a couple of times before our first show.

Can you describe your music? 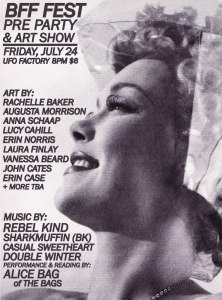 Alice: We’re doing all original songs that work with the some of the ideas that come up in Pipe Bomb for The Soul. The songs weren’t written for the book tour, I’ve been writing songs for years and some of the stuff just seems to fit. They range from punk to pop to jazzy, and by jazzy I mean songs where I use chords that sound good to me but are not commonly used in pop or punk songs. When I don’t know the name of a chord I just give it a name, I have a favorite chord I call Betsy.

What bands or (things) inspire you?
Fiona: Current bands that I’ve been listening to are Trash Kit/ Sacred Paws (Rachel Aggs is a total genius), Nots, Opposite Sex, Priests, Downtown Boys, and I still can’t get enough of last year’s Ex Hex album. I’m also a longtime fan of Eric Dolphy, Charles Mingus, and Thelonious Monk.

Alice: Sex Stains, No Small Children and Trap Girl are some of my favorite local bands here in Los Angeles.

I recently had the opportunity to volunteer at a girls’ rock camp called Chicas Rockeras in South East L.A. and that was a wonderful experience. Encouraging creativity in the campers and seeing their self confidence blossom was thrilling, it made me realize the power we have to shape our youth. Helping young girls find their voices and teaching them that it’s ok to take up space and to be assertive all through the medium of rock and roll, that is inspiring stuff!

Alice: I have a Gibson SG but I also like to play my blue Brownsville acoustic. Sometimes I use a Boss DS-1 distortion pedal. I recently started using hand crafted strings and I absolutely love the way they sound and feel. If you’re ever in East L.A., treat yourself to a set of Guadalupe Custom Strings.

Angie: I mostly play a Fender Musicmaster bass, but I also have a Vox teardrop bass I love. Ampeg amp, it’s gotta be Ampeg!

Favorite Detroit band or Artists?
Alice: I grew up listening to Motown and I still can’t resist singing along to The Supremes but my first record was Freda Payne’s Band of Gold and it’s still a sentimental favorite.

Angie: I also grew up listening to Motown, Temptations, Supremes, Smokey Robinson and the Miracles, Aretha Franklin. I do like me some MC5 too!

Fiona: I had a chance to see Invincible and was duly impressed with their lyrics about quantum physics and a critical trans politics. Mick Collins’ projects are always inspiring: the GORIES!!!

Tell us about your new book.
The book is based on a diary I kept when I was volunteering in Nicaragua in 1986. I was teaching at the time and many of my students were Central American. I was also doing graduate work. I figured that I might be able to satisfy my curiosity about Nicaragua and the Sandinista revolution by visiting the country but I wanted to college credit too, so I asked a professor if he would allow me to do an independent study of the Sandinista Literacy Campaign and he agreed. He asked me to journal every day. Years later I found the journal nestled among my photo albums. It was the starting point for the book. I’ve added quite a bit of reflection from an older point of view. It was an exciting time to be in Nicaragua and it was a life changing trip for me.