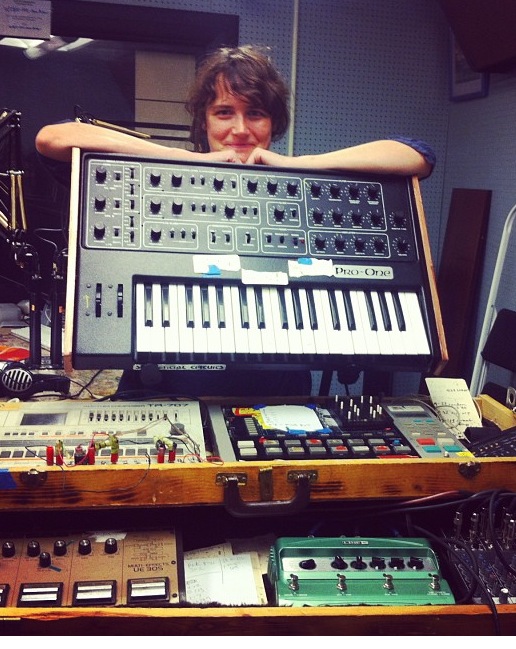 When and how did you start this project?

2000.  I’d been working Anthony Miller of Maximum Cloud on a project called “The New Weird,” he left town, so I started writing lyrics and recording solo.

Tell us about your first show.

It was in Bowling Green with Wolf Eyes and a TLASILA spoof band called “I Live in LA” with Mike Connelly of Hair Police.  Sam Consiglio of Tamion 12″/Perfect Weiners and Butts played with me.  I wore a dress, handmade for the occasion, by Amber of Interdimensional Transmissions.  That was one of the two instances where I performed in a dress.

How would you describe your music?

What bands (or other things) are your influences/inspiration?

This continuously evolves and there’s too much to list.  When I first start, Cosey Fanni Tutti of Throbbing Gristle was a big influence.  I sent her a CDr and she wrote back with feedback.  It was around the time when musicians were starting to post contact info on the internet, so it was really novel and exciting to exchange email with her.

Gear talk: what is your setup? Is it true you make some of your gear? Can you tell us about how you got started doing that?

I started making sound with simple oscillators, circuit-bent electronics, and tapes because it was all I could afford, in terms of gear.  Crafting my gear was desirable because it made the sounds feel more personal for me.  At the time, there was an element of excitement to breaking something open and exploiting it’s consumer intent.  A few years later, people began selling circuit-bent things on ebay and circuit-bending lost some of it’s appeal for me.  The current modular synthesizer trend is similar to me, in that you buy a pre-built item and piece together.  This is not to say I don’t like using consumer equipment; I love my synthesizers and drum machines.  I just finished grad school where I did a lot of work amplifying sculptural material with transducers, inspired by David Tudor and the wonderful Pauline Oliveros who I had the honor of working with at school.  I’d like to continue this work in addition to using vocals again.

Haha – well, I actually started as Vixen Hott: the name of my first tape, then shortened to Viki.  When I turned 30, I decided to give the project a name-lift, something sophisticated, and thought Viktoria would work.  However, it just didn’t stick, so I combined the names.  Maybe I’ll drop the Viki when I turn 40.

Who are your favorite Detroit artists?

All my friends are brill.

What do you want everyone to know about this project?

I have 2 tapes coming out on Ginkgo and Isolated Now Waves.