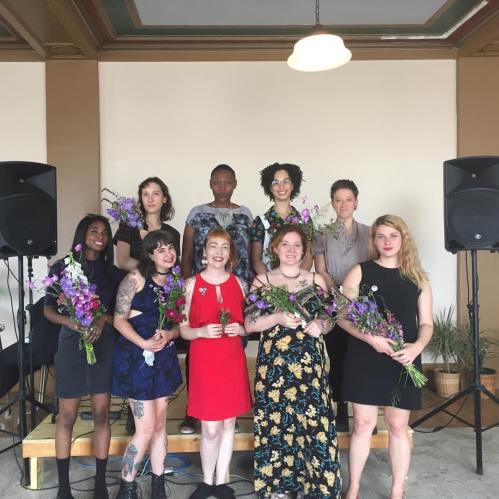 In 2013 Lauren Rossi began Seraphine Collective as a blog project featuring interviews and individual profiles of other women living and making music in Detroit. Her hope was to ‘highlight, inspire, and encourage current and aspiring musicians.’ These initial conversations sparked an exciting exchange of ideas, including the need for:

Since it’s inception, Seraphine has organized numerous shows of all genres featuring local, touring and emerging musicians, four summer music festivals, created zines, mixtapes, community dialogues, workshops and parties. We have experienced the transformative power of the dance floor. We are committed to encouraging and protecting each other while learning, creating and performing inside an entertainment culture dominated by patriarchal/racist/heteronormative/classist/ableist/ageist, oppressive norms.

Inspired by feminist ethos, Seraphine aims to be accessible to anyone who feels excluded/undervalued/patronized/tokenized/fetishized/underbooked/underpaid/unsafe in Detroit’s music “scenes.” We encourage honest expression of both feminist unity and differences. We aspire to leverage individual privileges, connections and resources towards manifesting our collective creative visions. We are interested in uplifting and creating culture- not a scene. We aim to center the joy and safety of women/femme/nonbinary diasporic people of color. We honor, seek guidance from and express deep gratitude to the inspiring people who have lived, organized and made music in Detroit before us. We welcome all who this resonates with to vibe with us.

Stay tuned for updates on our progress.
All photos are courtesy of the artists featured.