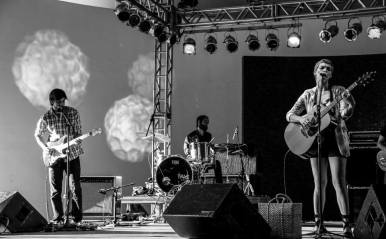 Who’s in the band (real name + nickname) and what do they play?

When and how did you become a band?

In 2008, after recording for a soundtrack in Brazil with a great producer I decided to take a chance so I started meeting with musicians and letting them know I was looking for someone to play with me, put up a band, etc. after a while I was asked to join a Serge Gainsbourg tribute band called Les Provocateurs and then a couple of friends from Nação Zumbi (one of the biggest bands in Brazil) started a project called 3namassa where male writers would compose for female singers. I did a small tour with them. Finally, in september 2008 I did my first show, singing my own songs and doing a few covers, the next year I began the production of my first album (Journal de BAD) which was released in 2010 and last year my second album (É o que temos) was out.

How did you decide on your band name?

You’re playing BFF Fest!  Thank you!  Any goals for the day?

I’ve been telling my band: tonight you oughta play like it’s your first day out of jail! ahhaah we plan on playing a real good show for you and we’re very excited to be in Detroit for the first time!!

What do you want everyone to know about your band?

Music is what matters…with music comes the love, and…

…It’s all about the love…

TOMORROW 3/5 @wolf___hailey joins Detroit legend and Seraphine guest instructor @hotwaxx at @friendscocktaillounge for a night of house music 🙌🏾
✨TOMORROW 3/5 at @deluxxfluxx another chance to catch @kesswa_ supporting the Athena World Tour @sudanarchives @cartel.madras @deluxxfluxx ✨✨✨
@wolf___hailey is also back on the decks this weekend supporting @furcoatmusic at @tangentgallery amongst local acts @bro.cco.li and @ke__thu who will be debuting tracks off their new album. This ones for the techno luver in u 🎛✨
A very Beige weekend is upon us! Catch two hot sets from @just_beige Thursday at Kiesling with @dezandresmahogani x @sambeaubien and Saturday with a gang of DJs raising money for Bernie Sanders 🔥✨ They will see you out on the dancefloor!
@tammylakkis and @blackmoonchild___ are serving up some tunes for the Enough is Enough afterparty at @pizzaplexl3c this Saturday. Enjoy an eclectic art exhibition, great eats, drinks and music in a production that speaks to all your senses!